If you still don’t know, Mount Fuji is the highest mountain in Japan with its height of 3,376 meters. Its nearly perfect cone shape made it even more popular. Like Mt. Batur in Bali, Mt. Fuji is a sacred and an active volcano. This majestic mountain happens to stand on two prefectures – Yamanashi and Shizuoka.

People say it’s shy because it tends to hide. If you’re lucky, you’ll be able to see Fujisan from Tokyo and Yokohama. You can also catch its beauty just by riding the shinkansen (bullet train) between Tokyo and Osaka. Visibility gets better during the colder season of the year than in summer. 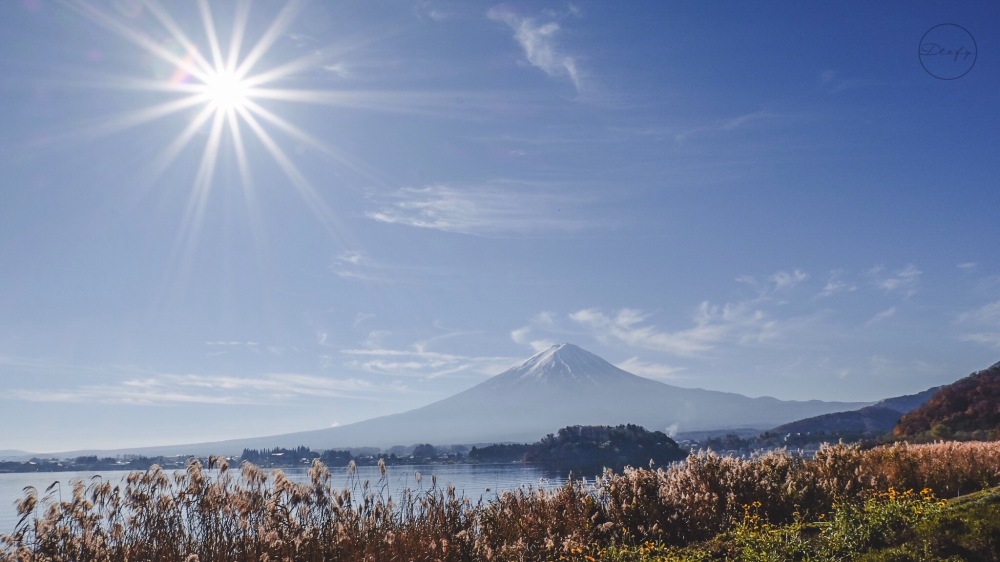 There are several ways to view Mt. Fuji. On a more leisurely pace, you can visit the Fujigoko, more known as the Fuji Five Lakes in Yamanashi prefecture.

A DAY TRIP TO YAMANASHI

The northern half of Mt. Fuji stands in Yamanashi. West of Tokyo in the Chubu Region, Yamanashi houses the famous Five Fuji Lakes namely Kawaguchiko, Saiko, Yamankako, Shojiko, and Motosuko. They say it’s one of the best places to view Fujisan from a close distance.

Among the five lakes, Lake Kawaguchiko is the easiest to access for tourists and is more developed than the four other lakes. The best views of Mt. Fuji can be enjoyed from Lake Kawaguchiko’s northern shores.

Below are some of the tourist attractions in Yamanashi:

You can enjoy the majestic view of Mt. Fuji while strolling in Oishi Park or dining in one of their outdoor restaurants.

Just by its name, you will only enjoy this place come Autumn. Although most would prefer the Kawaguchiko Music Forest where you can find the Momiji Tunnel, the maple corridor is easier to access. Just ride the Red Omnibus and stop right in front of the maple tree covered street.

The Kachi Kachi Ropeway ascends to an observation point near the summit of Mount Tenjo, from where Lake Kawaguchiko and Mt. Fuji can be seen.

A unique museum showcasing kimonos created by Kubota Itchiku who spent his lifetime reviving the lost art of Tsujigahang silk dyeing. One of his notable and yet unfinished masterpieces is the “Symphony of Light” which comprises 80 kimonos that form a picture of Mt. Fuji.

The Yamanashi Gem Museum displays gems, precious stones and large quartz crystals collected from Japan and other parts of the world. The museum also has a store where you can purchase pieces of jewelry and other trinkets made with the same types of gems on display.

Aokigahara, also known as the Jukai which means Sea of Trees, is located at the Northwestern part of Mt. Fuji and can be accessed by riding the Retro or Omnibus.  Its entrance is in the parking lot of the Lake Sai Bat Cave.

Some tourists visit the area because of the two caves – the Ice Cave and the Wind Cave but some visit because of its macabre side. Unfortunately, it happens to be coined as the world’s second most popular suicide location.

Locals say there are three types of visitors who dare to visit Jukai: the trekkers, those who are interested in scenic vistas of Mt. Fuji; the curious, those who are hoping for a glimpse of the macabre; and those souls who don’t plan on leaving Jukai.

If you plan to visit the forest, be respectful. Contact the local authorities if you spot something so they can appropriately handle the situation. Anything you experience or witness in the forest should not be taken lightly.

If you’ve read my previous blog posts, you would know we came from Tokyo, specifically in Oji. To reach Yamanashi, we rode the train from Oji Station (JR Station) to Otsuki. If you have a JR Pass, this journey will be covered by the pass.

Aside from the train, you can also reach Fuji or Kawaguchiko by bus. There are lots of buses coming from and going to Tokyo, Shinjuku, and Shibuya.

A variety of buses can be found right outside Kawaguchiko station. These buses will bring you to several tourist spots in Yamanashi.

Taking one of the Omnibuses is the easiest way to get around the majority of the Five Fuji Lakes. The Retro or Omnibus has three different lines: Red Kawaguchiko Line, Green Saiko Line, and the Blue Narusawa Shojiko Motosuko Line.

The bus fares vary depending on where you want to go. They also offer an unlimited bus pass which covers the three lines. This particular pass can be used for two consecutive days and costs 1500 yen for adults and 750 for kids.

Another bus network travels between Fujiyoshida, Oshino Village and Lake Yamankako.  The Fujikko buses run eleven times or once every one or two hours every day, almost similar to the Omni Blue bus line. It also has a 2-day pass which costs 1500 yen for adults and 750 for kids. There is a cheaper alternative but it only covers the areas between Oshino Village and Yamankako. You can ask the driver about it.

You can learn more about Mt. Fuji’s history and culture just by riding this bus.

This particular tourist bus departs from Kawaguchiko Station every 1.5 hours and stops at several sites near the famous Chureito Pagoda in Fujiyoshida and some spots near the Oshino Village before it loops back to Kawaguchiko Station. There are 6 services every day but during winter they cut down their trips to 5. Don’t be confused about their free coupons, you still have to pay for it so you can ride the bus for 2 consecutive days. This 2-day pass costs 1030 yen for adults and 310 for kids.

This line will bring you to the 5th Station of Mt. Fuji where you can start your ascent to the mountain.

Can’t find which bus to take? Don’t fret! There is a network of regular buses that accesses the more remote areas of Lake Shojiko and Motosuko, as well as Oshino, Lake Yamankako, and Gotemba.

So far Japan is the only country I know which has TONS of passes for different kinds of purposes. And yes, Japan definitely has passes for Fuji!

This pass can be used within the Fuji Five Lakes region and the neighboring Hakone area. It costs 8000 yen.

This ticket combines a roundtrip bus ticket from Shinjuku to Kawaguchiko or Yamankako and a 2-day pass for either Omnibus or the Fujikko bus. It is valid for seven (7) days and can be purchased in Shinjuku for 4350 yen.

If it’s not that obvious, this can be used in the amusement park, Fuji Q Highland, BUT it includes access to buses with park passports and in some cases accommodations.

This pass allows unlimited use of the Fujikyu buses around the Fuji Five Lakes. This covers both the Omnibus and Fujikko buses. You can purchase this pass at the ticket counters in Kawaguchiko Station, Fujisan Station, Mishima Station, Shin-Fuji Station, Fujinomiya Station, Gotemba Station, and the Asashigaoka or Yamankako bus stop. There are two variations – one that includes the entire Fujikyu railway line and the other one includes Fujikyu trains ONLY between Kawaguchiko and Shimoyoshida stations. It costs 3550 yen and 2550 yen respectively.

To summarise everything, we started our day in Kawaguchiko where we ate our lunch. We then went to Oishi Park, Maple Tree Corridor, and strolled around the Kawaguchiko Lake just marveling at the view. We passed by Lake Saiko and stopped by Aokigahara Forest. We went back to Kawaguchiko and grabbed a meal at Tempura Idaten. We then called it a day and headed back to Tokyo.

What You Should Know Before Applying for a Japan Visa

A Day Trip to Yamanashi Prefecture

What Tokyo So Long?

How to Get to Mt. Aso from Fukuoka

Feel free to leave comments or message via e-mail if you have any questions. If you like this article and want to see or know more about my #JaFUN trip, or other trips and tips, follow me on Instagram, Facebook, and Twitter.